TOKYO-Toho Gas Co., Ltd. (President: Yoshiro Tominari; Headquarters: Atsuta-ku, Nagoya) and Mitsui O.S.K. Lines, Ltd. (MOL; President & CEO: Junichiro Ikeda) today announced the implementation of a demonstration test to supply LNG (LNG bunkering) to the LNG-fueled (Note1) tugboat Ishin (Note2) in the Port of Nagoya. This marked the first LNG bunkering in the Port of Nagoya, and the test confirmed that LNG can be safely supplied to vessels at the port.

LNG was transported via truck from the Toho Gas Chita-Midorihama LNG Terminal (Chita-shi, Aichi Prefecture), and supplied with a truck-to-ship system (Note 3) to Ishin, berthed at the Port of Nagoya's Garden Pier.

Based on the findings of the demonstration test, Toho Gas and MOL will continue working to reduce the environmental impact of the maritime industry by promoting the use of LNG fuel by vessels calling at the Port of Nagoya. 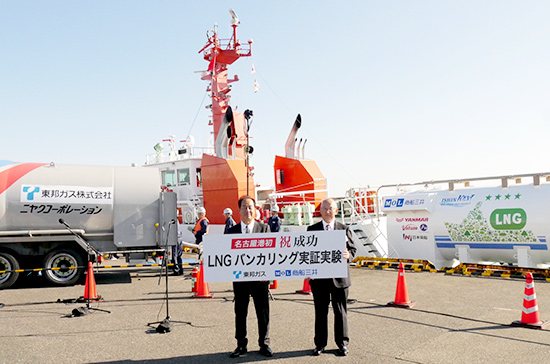 (Note 3)
The truck-to-ship system is a procedure to supply LNG fuel from an LNG tank truck on shore to a vessel.

(Note 4)
Regulations to prevent air pollution from vessels were established in Annex VI issued in 2005 in the MARPOL Treaty adopted by the International Maritime Organization (IMO). Since then, exhaust gas regulations have become more stringent worldwide. Starting in January 2020, the limit for sulfur in fuel oil used on board ships operating outside designated emission control areas will be reduced to less than 0.50% m/m. 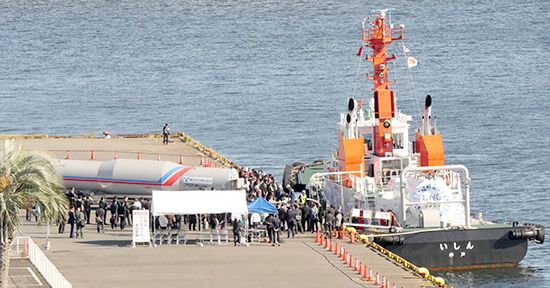