Named at the end of September 2019, the barge is owned by marine transportation company Q-LNG Transport.  The newbuild is designed to carry 4,000 cubic meters of LNG. Its tug, the Q-Ocean Services, is scheduled to be launched in late October.

“The Q-LNG 4000 is dedicated to delivering safe transit to all ships and ports it will serve,” Shane J Guidry, Chief Executive Officer of Q-LNG Transport, said.

The LNG ATB Unit is designed to meet the requirements of the American Bureau of Shipbuilding and the International Gas Carrier code as an LNG bunkering barge. The vessel is expected to be delivered in the first quarter of 2020.

Back in November 2017, VT Halter Marine, part of ST Engineering North America, was awarded a contract by Q-LNG Transport to build the ATB LNG unit, which was announced as part of a long-term contract with Shell Trading (U.S.) Company, to deliver LNG as a fuel source to various ports in Florida and the Caribbean.

Specifically, the barge is designed to provide ship-to-ship transfers of LNG to vessels that use LNG as a fuel source and also ship-to-shore transfers to small scale marine distribution infrastructure in the US Gulf of Mexico and abroad.

“We are proud of this successful launch. It marks a significant milestone in our role to deliver cleaner and more efficient fuels for the cruise and commercial ship industries,” Ronald Baczkowski, President and Chief Executive Officer of VT Halter Marine, commented.

In August 2018, Q-LNG Transport told World Maritime News it had signed a letter of intent with Halter Marine for a second LNG ATB. According to the company, the barge would have a much larger capacity reaching 8,000 cbm. 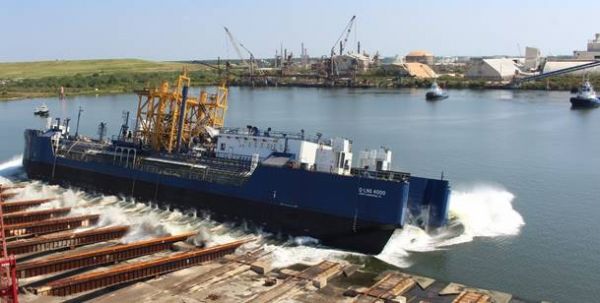