MOU outlines how SGMF and IAPH plan to share knowhow on safe, effective, sustainable supply and use of all gases as marine fuel.

A Memorandum of Understanding (MoU) has been signed by The Society for Gas as a Marine Fuel and IAPH with its Clean Marine Fuels Working group to work together to increase understanding about the safe, effective and sustainable use of all gases as marine fuel. In particular, the potential use of Ammonia will be investigated from source to ship with all related safety, operational and sustainability considerations.

Mark Bell, General Manager and COO of SGMF commented: “The Society for Gas as a Marine Fuel (SGMF) was formed in 2013 with the primary objective of advocating the safe and sustainable use of low flashpoint fuels for ships. Safety is the prevalent factor and as the industry transitions towards an inevitable low carbon future, at SGMF we are looking forward to working with IAPH’s experts from ports, many of whom are either already operational or who are in the process of implementing infrastructure that provides alternative fuels to vessels.”

IAPH Technical Director Antonis Michail commented, “As with the recent commenting paper submitted by IAPH to the IMO on the case for MBM revenue allocation to land-based infrastructure, it is our belief that ports may serve as the key link between the land-based fuel producers and the sea-based fuel consumers, as well as the link between fuel production and other non-shipping fuel consumers. Ports have the potential to act as energy hubs as a cheaper and safer alternative than storing it elsewhere. SGMF members with their technical competences have the potential to help us make that happen.”

Capitalising on over a decade of knowhow on bunker checklists, audit tools to evaluate terminal operator concessions and terminal readiness guidance with tried and tested procedures to ensure rigorous operational safety when handling LNG will now also be applied to new alternative fuels such as ammonia, hydrogen and methanol.

This has become a major focus of the IAPH Clean Marine Fuels (CMF) Working Group. Policy advisor to the Port of Amsterdam and Chair of the CMF Peter Alkema comments: “Our Working Group is busy developing a generic audit tool as well as truck-to-ship and ship-to-ship bunker checklists for liquified gases, so being able to tap into the pool of experts from the SGMF will be extremely useful. As an example, a recent study by the Port of Amsterdam and DNV concluded that spacial safety considerations are especially important when considering the deployment of bunkering infrastructure for ammonia at ports. How to handle these issues will be for all stakeholders, not just the ports.”

SGMF has proposed to include some of the IAPH CMF tools in an updated version of its own LNG Bunkering Safety Guidelines (ISBN 978-1-9996669-7-2), which will be published towards the end of the year in early December. 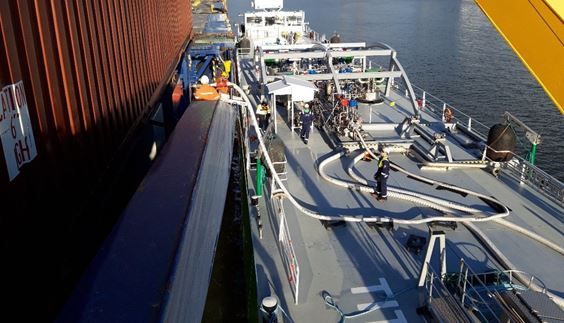 About SGMF:
The Society for Gas as a Marine Fuel (SGMF) is a non-governmental organisation (NGO) established to promote safety and industry best practice in the use of gas as a marine fuel. The Society has Consultative Status with the IMO and is governed by a representative Board and driven by three principal Committees. SGMF has several working groups at any one-time solving issues and producing outputs such as Guidelines and checklists for the industry. The Society has produced 12 ISBN publications, has over 149 international members ranging from energy majors, port authorities, fuel suppliers through to equipment manufacturers and classification societies.

About IAPH:
The International Association of Ports and Harbors (IAPH) is a non-profit-making global alliance of 170 ports and 140 port-related organizations covering 90 countries. IAPH has consultative NGO status with several United Nations agencies, including the IMO. Through its knowledge base and access to regulatory bodies, IAPH aims to facilitate energy transition, accelerate digitalization and assist in improving overall resilience of its member ports in a constantly changing world. Since 2013 IAPH port member specialists have been collaborating on the safe and efficient facilitation of new marine fuels at ports with industry partners by developing practical tools to facilitate safe and efficient bunker operations.