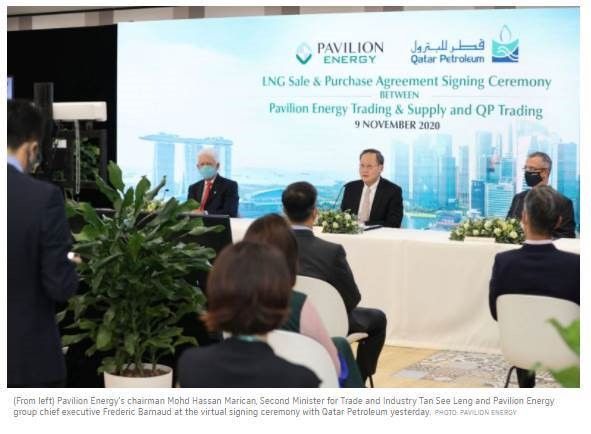 The agreement will see Qatar Petroleum supply up to 1.8 million tonnes of LNG per year to Singapore from 2023.

Each LNG cargo delivered under this agreement will be accompanied by a statement of the associated greenhouse gas emissions with the shipment.

This partnership not only bolsters Singapore's LNG supply, but also contributes to the development of more sustainable natural gas strategies.

Global demand for LNG has accelerated in recent years, with natural gas viewed as the cleanest form of fossil fuel for energy production.

In 2018, Singapore's natural gas consumption was the equivalent of about nine million tonnes of LNG a year.

Singapore's LNG terminal, which has four tanks, has regasification capacity of about 11 million tonnes a year.

The agreement between Pavilion Energy and Qatar Petroleum is the result of a tender launched by Pavilion Energy earlier this year, seeking not just LNG supply but also ideas for the reduction of greenhouse gas emissions as well as quantification and reporting methodology for LNG through its journey from the well to discharge port.

Pavilion Energy's chairman Mohd Hassan Marican said that the agreement with Qatar Petroleum not only represents Pavilion's ability to supply LNG reliably and competitively to Singapore, but is also a bold step towards energy transition.

Pavilion Energy is currently one of two LNG term importers in Singapore, alongside oil giant Shell.

"This partnership will strengthen our core Singapore market and our role as a global energy trader," Tan Sri Marican said.

Speaking at the signing ceremony yesterday, Second Minister for Trade and Industry Tan See Leng called the agreement "an important and innovative development for the LNG industry".

He noted that the companies have pledged to develop a methodology to quantify carbon emissions for each LNG cargo. "This will pave the way for increased demand for carbon offset projects to reduce emissions associated with the LNG supply chain," he said.

Countries and companies seeking to lower their carbon emissions are shifting naturally towards natural gas, said Dr Tan. He noted that about 95 per cent of Singapore's electricity is generated using natural gas, up from just 26 per cent in 2001.

Dr Tan said LNG would continue to play an important role in the Republic's energy strategy for years to come even as it ventures towards other alternative energy sources such as solar energy. "LNG is especially attractive for countries which face constraints in deploying renewables due to limitations in geography, size and alternative energy sources," he pointed out.

More than 50 companies with LNG trading or business development presence are located in Singapore, and they choose to be here because of the country's rich ecosystem of players across the LNG value chain, close linkages with the region and ease of doing business, he added.

Dr Tan said: "We can expect our total volume of onshore LNG trades to continue growing as we work with our industry partners and companies to expand their LNG presence locally and globally." 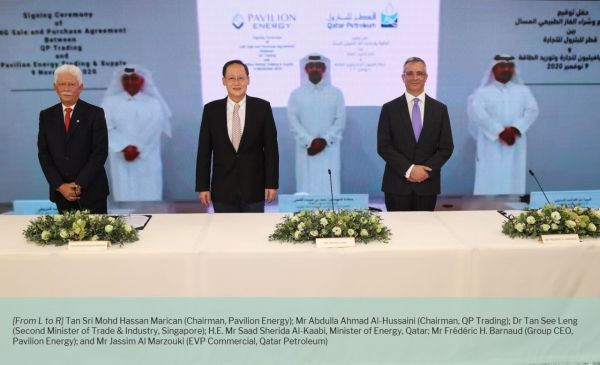